I hope no one finds this terribly inappropriate.

Let me give you a little background.  We are members of the Church of Jesus Christ of Latter-day Saints...Mormons.

Anyway we were at sacrament meeting yesterday morning and my 5 yr old was drawing pictures during the speakers.  She whispered to me that she was going to draw a picture of herself.

This is what she drew 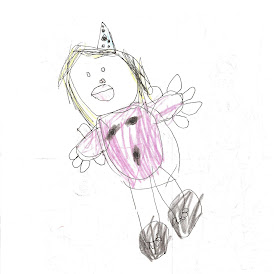 oh man...I about lost it right there.  I was laughing so hard that I was crying.  But of course it is not appropriate to laugh out loud.  So here I am laughing between my legs, trying to not make a scene.

Then after I composed myself, I explained to my daughter that we are supposed to draw modest pictures of people.  So only draw things that aren't covered by clothing.  I thought she got it because we often talk about modesty and such.

Then she took the black colored pencil and scribbled over those 3 spots...making them worse.  Oh man.  You think I was laughing before.  This REALLY got me.

On the bright side...I think my daughter is such a little artist.  Most pictures she draws I can actually tell what it is.  Lets just say that my stick people don't even look like a person.

How can you not love the things kids do?! I would've been hard pressed not to laugh too! But definitely kudos for the drawing skills :D