I am so excited to share with you my entry for the Top Stitchers Head to Head competition.  Just like last season, it was a little scary, a lot of knots in my tummy, and a lot more apprehension! 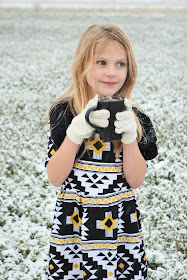 I thought my prompt was all about Christmas…So, a couple Mondays ago, when it started to snow, I knew I was on a limited amount of time to get this baby from fabric to dress. 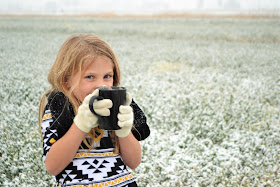 So after a mad dash to get the pattern printed, taped, cut, I was off the to machine.  Serging away at the dress.  Then, just as I was finishing up the dress, I looked outside and saw that all the snow that had fallen in the last couple of hours, had disappeared and there was no snow in the forecast the rest of the week!

That’s Idaho for you! 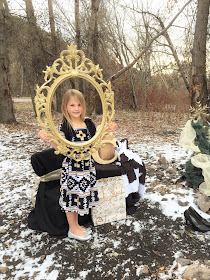 I have a feeling that if Idaho was a person, they would be bipolar.  Snow and cold one minute, and summer the next.  It is what it is, and I still love and live here… 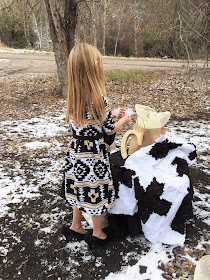 After being bummed for 2.5 seconds, we dashed into action.  Grabbed a “few” photo props and jumped in the car, in search for some snow.

Off we drove to the nearby-ish hills.  Daylight was quickly leaving.  Finally, near the ski hill that is 30 minutes away from our house, we found a small patch of snow.  It wasn’t much, but it would do. 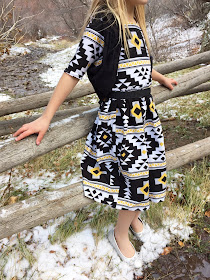 We set up a few things and started to snag a few pictures, when the DSLR camera decided it was time for a nap.  Unlucky for me, I hadn’t charged the camera.  '

Silly me….Who needs a camera when they drive clear to the ski hill to get a few photos?

Thankfully, I had a backup phone camera that did the trick while we were there 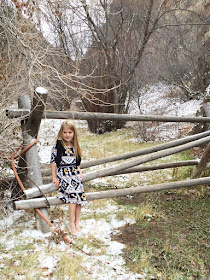 {who am I kidding, my phone never leaves my side, unless I misplace it for a few minutes}.

Poor girl was freezing her hiney off, while I bossed her around.  I think this will be a trip all 3 girls remember for a long time 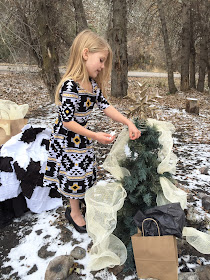 While there we discovered this beautiful rock wall and little stream, with lots of green all around.  And I’m not joking when I say that I was hoping to encounter any wildlife of any kind while there (I mean bears are really not my cup o’ tea)

Then off to home and to find some hot chocolate.

Now, remember how I told you that if Idaho was a person they would be bipolar.  The person would also be a woman, because Idaho can never make up her mind.

The week proceeded like usual, until Thursday morning when I realized that it was…..

Not snowing a couple of flakes, but REALLY snowing. 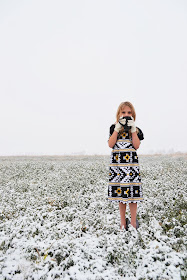 As soon as the girls got off the bus, Addy was instructed to “get dressed again, we’re going to the hay field behind the house and taking a few more pictures”.

I’m so glad that my 6 year old girl is such a good sport when bribed with hot chocolate.  I packed her through the backyard to the field behind our house and took a few more pictures.

And that my friends, is how we got to where we are. 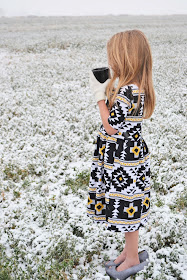 With that all being said, make sure to stop by the Sewing Stadium: Top Stitchers post where I slaughter a remix of The Night Before Christmas Poem.

Also, I would love for you to check out, and give me your score!

A few of the details: 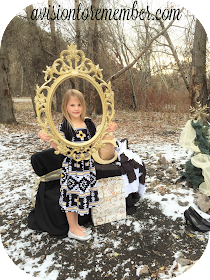 I used the Bluezette Dress Pattern by Love Notions and paired it with Riley Blakes beautiful knit print from their 4 Corners line that Simple Simon and Co created.

The vest I just cut and cut and sewed until it fit.  I'll have the pattern for you all later on this week...or at least how you can make your own, no matter the size. 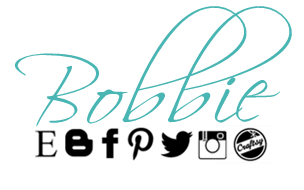